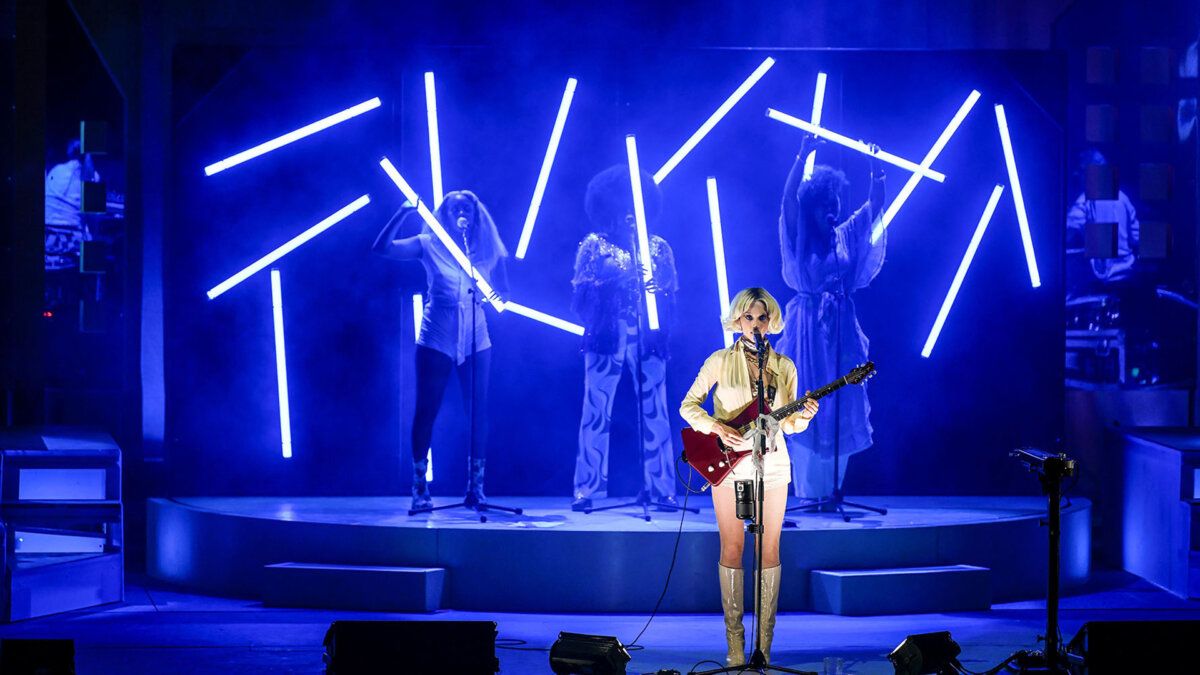 Grammy award winning musician, singer, songwriter, actress and producer St Vincent (Anne Erin "Annie" Clark) is as exciting as a live artist as she is accomplished and provocative as a music creator, renowned for highly visual performances, an invigorating mix of grittiness, conceptual art and superlative music, so this was a great match with lighting designer Paul Normandale, who also has a penchant for imaginative risk taking.

Paul designed the set and lighting for St Vincent’s most recent Daddy’s Home tour following the launch of the highly acclaimed album of the same name. He worked closely with the artist who had numerous ideas about the style she wanted onstage, and after some creative brainstorming, Paul evolved a dynamic set and lighting scheme to bring flexibility, texture, depth, and dimension to the stage that was also practical and tourable.

Right at the core of the touring lighting system were 19 x Astera Titan Tubes.

These were fully maximised as scenic, practical and effects light sources for the floor lighting rig which was based around a 16ft diameter revolve stage built by All Access. This touring lighting / set package was installed underneath the top lighting at each venue and facilitated the fluid dramatic theatrical style scene changes and backdrops supporting the show’s dynamics and narrative.

Running fully wirelessly, 13 of the Titan Tubes were a perfect solution for a light source on the back wall of the motorised revolve set piece.

Attached at jaunty angles to the wall with a series of spring-clips for quick and easy rigging, the Titan Tubes worked as both a solid back light fixture on one side and as blow-through in conjunction with a semi-transparent cloth on the revolve wall which spun around 180 degrees to create a complete cityscape.

The remainder of the Titan Tubes were positioned on the floor along both sides of the revolve wall to provide up lighting for the background vocalists.

During the song “Sugarboy” the backing vocalists unclipped three of the Titans from the back wall and used them as illuminated props as they danced around the stage.

“Combining the essence of old-skool theatre with the revolve and different backdrops and contemporary technologies – the Titan Tubes – meant numerous different environments skillfully could be created to reinforce each song,” explained Paul. From fast-strobing effects to beautifully subtle pastels to rich electric neon colour palettes, they helped bring elements of surprise, ambience and visual flourishes of soul, jazz, rock, and other genres to the stage and were “worked very hard throughout the set.”

Paul’s UK-based lighting rental company, Lite Alternative, owns Titan Tubes and Astera AX3 LightDrops, and he has been using products on different shows and events for some time. “The quality of the light is excellent, and they are extremely well packaged, so you have everything you need to hand.”

Operating lights on the St Vincent tour was LA-based lighting specialist Tess Falcone. It was the first time she had worked with Paul, an opportunity she relished, commenting that “his creativity and industry knowledge is impressive, so I was over the moon to collaborate with him and help achieve his goals for the show.”

Tess also enjoyed working with the Titan Tubes describing them as “an incredible fixture” and observing that they stood up remarkably well to being ripped off and pushed back onto the scenic wall and sometimes accidentally dropped! She was also impressed with the battery life.

“They are a beautiful light source,” she said, adding that they did some video and TV shoots on the tour using the Titans where they didn’t have their full lighting rig, including at Austin City Limits and for the Jimmy Kimmel Live show. “They are fantastic on camera as well as in person. We used them as front light and as an effects light and the light quality is really solid for both applications.”

The battery powered / wireless DMX functionality meant Titan Tubes could be deployed around the stage with a very expedient footprint for these shows, enabling “some really different looks, even without the rest of the full show.”

They were also ideal for the smaller gigs where it was impractical to fit many lights onstage, so Tess positioned them on top of amps or around the stage on their stands to create straightforward architecture and effects without impeding the backline.

Tess and her partner, Dan Hadley, first used Astera products – AX1 PixelTubes – for a Jimmy Eat World video shoot in 2020 and loved them. Hanging down from a truss structure rigged with a fishing line – thanks to their light weight – the AX1s created a perimeter around the band that “looked absolutely beautiful,” she elucidated.

In addition to the experience of working with Paul, Tess loves St Vincent’s music and enjoyed working with this incredibly talented artist who is tuned-in and interested in every aspect of her live performances.

Tess hopes there will be the opportunity for more shows this year. “All credit to Paul for creating such a wonderful world for us to work in,” she concluded.